by firstinvestorsusa
in Investing, News
0

Image of eyeglasses, glass of water, touchpad and financial documents at workplace with businessmen handshaking on background

Investors appeared to be taking the coronavirus outbreak more seriously on Friday, after sentiment on the illnes whipsawed markets earlier in the week, causing an almost daily zigzag between gains and losses. Given risk-off conviction was elevated as the trading week finished–illustrated by all major U.S. and European indices as well as most of Asian markets finishing in the red on Friday–it would be prudent to expect additional downside movement when trade resumes on Monday.

Further verifying the escalation of market worries: gold rose and yields, including for the benchmark 10-year and longer dated 30-year bond, fell as investors sold off risk assets in favor of safe havens.

All major U.S. indices, the S&P 500, Dow Jones, NASDAQ and Russell 2000, each slumped ahead of the weekend; the former three indices also showed losses of at least 1.2% for the week. In addition, stocks fell on a weekly basis for the first time in February after giving off “strong bearish signals” in recent weeks. 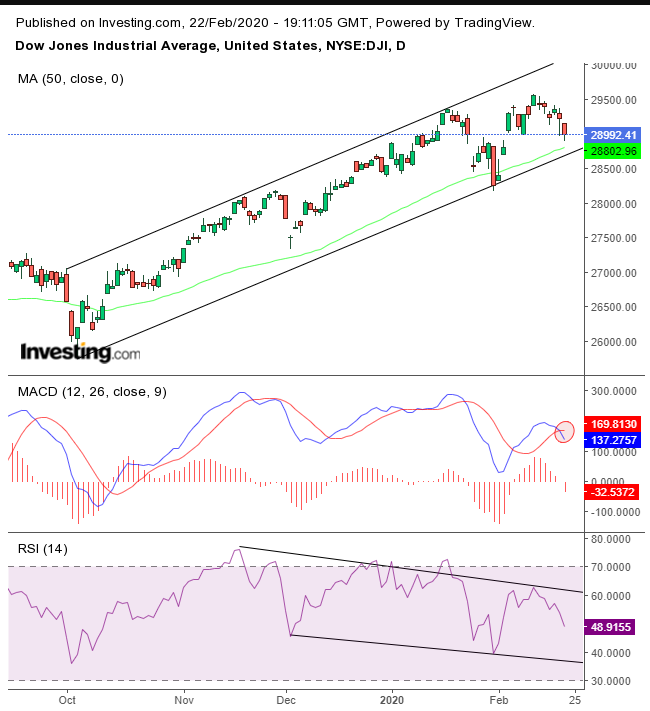 While the Dow Jones Industrial Average is still within a rising channel, reinforced by the 50 DMA, it has continued to provide bearish technicals with the MACD and the RSI triggering divergences, demonstrating that a broad price measure and momentum have not been supporting the recent advance. All three major U.S. benchmarks are now showing the same patterns: the first weekly decline this month with the MACD and RSI providing negative divergences.

Viral Spread Picks Up Speed Outside Of China

As the week ended, the epidemic entered a new phase, with reported cases slowing inside China but growing outside of the Asian nation: more than 500 in South Korea, 85 in Singapore, 135 in Japan, with fresh cases recorded in the Middle East and Europe.

During this weekend’s G-20 summit in Riyadh, the world’s top finance ministers discussed the biggest challenges currently confronting the global economic outlook. Included, of course was the necessity to cooperate against Covid-19. The IMF has downgraded its GDP growth outlook for China to 5.6%; it’s previous estimate, before the pandemic, was 6.0%.

The global economy will likely slow as well, as the shut-down in China, where huge swathes of the population remain quarantined continues to decrease trade, disrupt supply chains and choke off tourism – all of which weighs on market sentiment.

Even data out of the U.S. showed evidence of a slowdown. The Markit Composite PMI for February, released on Friday, which measures factory and service output combined, fell by 3.7 points to 49.6 entering contraction territory. It’s the lowest point for the measure since October 2013–when the U.S. government shut down.

Data reported at the end of the week showed that Australian and Japanese manufacturing also took a hit. South Korean automakers suffered from a drop in demand from China, sales were eviscerated, plummeting 92%. Ironically, the euro area bucked the trend, with economic activity surging to a six-month high and German manufacturing picking up.

On the other hand, could additional government spending counter the virus fears currently pressuring financial markets? The Organization of Economic Cooperation and Development (OECD) thinks so. It advocates increasing fiscal stimulus through such things as infrastructure projects and other spending.

Last month we suggested the virus-driven selloff was likely overdone. At that time we were relying on historical data of other viral outbreaks such as SARS. However, UBS Chairman Axel Weber thinks the economic impact of the virus is being underestimated. A member of the World Health Organization’s (WHO) emergency committee warns that the coronavirus may just be “Disease X,” a pandemic that would spark an international contagion, something the WHO warned about years ago.

Gold, another reliable harbor in any market storm, reached its highest level since Feb. 12, 2013. 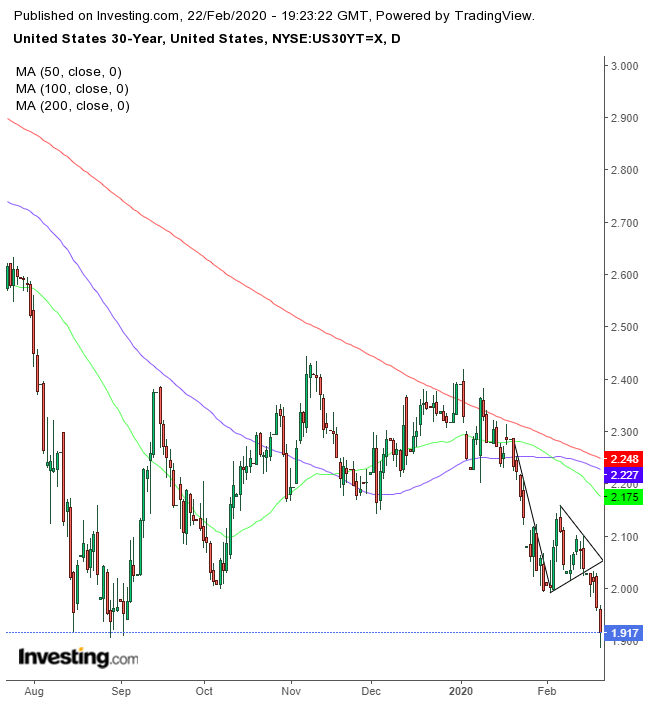 As well, yields on the long bond, the U.S. 30-year Treasury, fell to an all-time low as investors shifted en masse into government bonds. While the August-September lows may fuel a return move, the preceding bearish pattern signals another leg down, repeating the preceding tumble from 2.4 to 2.000. 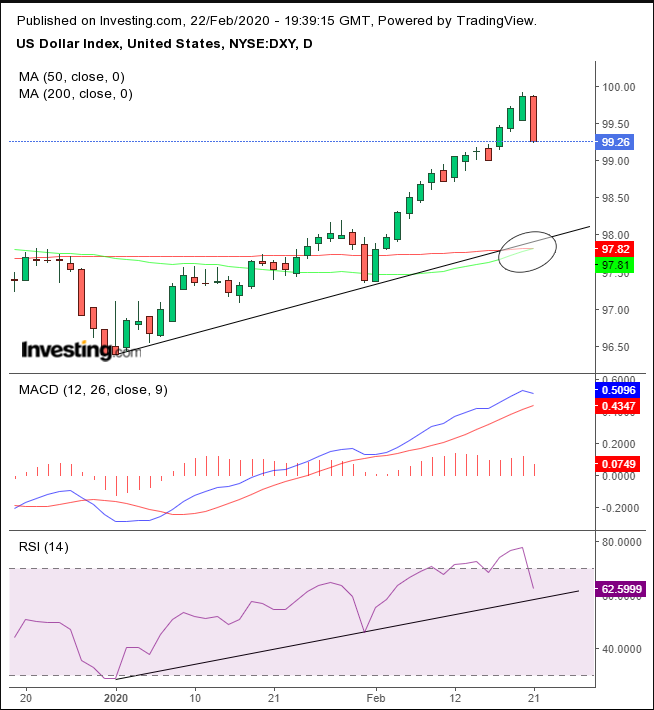 The dollar plunged, almost entirely wiping out gains from the preceding three-day rally and strengthening the yen, which recouped some of its biggest two-day losses since 2017, after closing on Thursday above 112, its highest point since April 17, 2017.

After the surprise surge in eurozone economic activity, the single currency jumped. While the dollar is an uptrend, it has room for a correction toward the uptrend line above 98.00. The 50 DMA reached up to the 200 DMA, to either trigger a golden cross, or to confirm the bigger MA’s resistance. 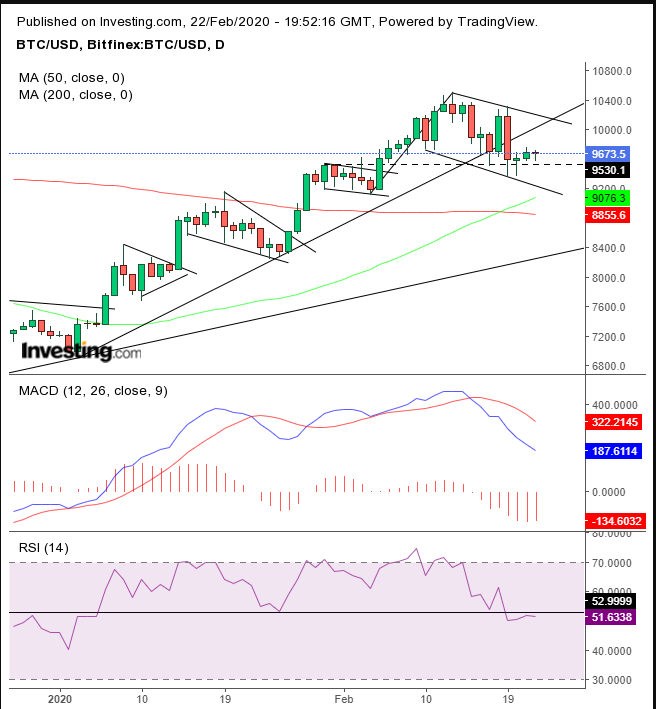 While Bitcoin‘s technical data is providing a mixed picture, the price may be forming the fourth–and biggest–bullish pattern since the H&S bottom, which was completed at the beginning of the year. The cryptocurrency remained steady after Financial Stability Board Chair and Fed Governor Randal Quarles warned finance policy makers ahead of the weekend’s G20 meeting of their failure to speed up efforts to digitize finance.

Technically, an upside breakout to what is possibly a bullish flag, at the crucial $10,000 level, would signify that investors might be using Bitcoin as another haven asset, as they remain more concerned about the coronavirus than anything else regulators may throw at them. 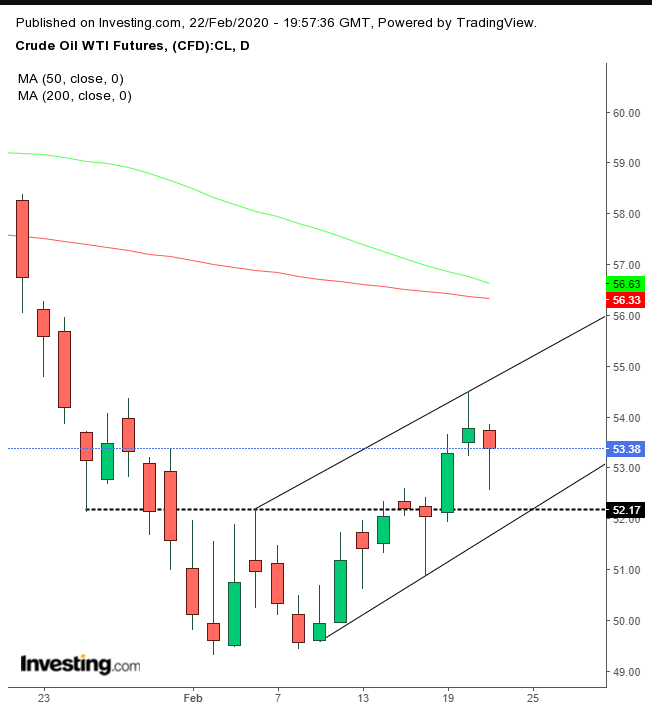 Oil fell on Friday after major OPEC/Non-OPEC powerhouses Saudi Arabia and Russia disagreed about production cuts in order to combat shrinking demand amid the global virus attack. Since Russia isn’t willing to lower production, OPEC decided not to cut. While the decline erased Thursday’s gains, the commodity still closed well off its lows. The price remains in a rising channel since the February bottom, showing support above $52, the January low.

All times listed are EST

4:00: Germany – Ifo Business Climate Index: anticipated to fall to 95.3 from to 95.9, but we may see a surprise uptick after Friday’s data showing eurozone economic activity jumping to a six-month high.

20:00: China – Manufacturing PMI: the government’s official number is expected to show a plunge to 45.0, well intro contraction territory, from January’s 50.0 cut off level.

THE ROBOT HAS LANDED. Santi, the sanitation robot, arrives in SM to fulfill a new mission. He came down to...

The Department of Labor and Employment (DOLE) said it is preparing to extract Filipinos who are located in affected areas...

The Office of the Presidential Adviser on the Peace Process (OPAPP) on Friday said budget and logistical problems have delayed...